Gyrodactylus salaris is a parasite, about 0.5 mm long, living on the fins, skin and gills of salmon (Salmo salar). It has sharp hooks that it uses to attach itself to the surface of salmon fry. The parasite feeds on the cells and mucus around the attachment site. Both the attachment and feeding disturb the normal function of the skin and gills. A mild infection does not harm the fish very much, but in case of a more serious infection, the mechanical irritation will lead to excessive excretion of mucus. The damaged skin is vulnerable to infection and fungal diseases (Saprolegnia).

The parasite is dangerous for salmon stocks migrating to the Atlantic or the Arctic Ocean. If spread to for an example Teno or Näätämö it would probably collapse their salmon populations in a few years. Wild salmon in the Baltic Sea catchment area and fish in Finnish fish farms are resistant to it. G salaris is quite commonly found in Finnish fish farms.

Gyrodactylus produces live offspring. The parasite carries the next generations inside itself, so it can reproduce very fast under favourable conditions.

The parasite is not transmitted to humans or domestic animals, and does not prevent the use of fish for human consumption.

Gyrodactylus salaris hardly ever causes any symptoms in Finnish fish farms or in wild salmon in the Baltic Sea catchment area. Once attached to the skin of wild salmon migrating to the Atlantic, the parasite reproduces exponentially and thousands of parasites on the skin cause fluid imbalance and make the fish vulnerable to secondary pathogens. Infected salmon have greyish skin and tattered fins.

Gyrodactylus salaris cannot be diagnosed visually. Newly killed or anesthetized fish can be examined while still in water using a dissecting microscope or a good magnifying glass. Also, ethanol preserved whole fish or fins can be used for examination. G.salaris parasites are most often located on pectoral and pelvic fins.

Gyrodactylus salaris mainly spreads from infected fish, but also via fishing gear, water and other goods. It can also reproduce on the skin of rainbow trout, arctic char and grayling. It can live for short periods of time on the skin of many other fish species. Gyrodactylus is a freshwater parasite, but it can reproduce in up to 5 ‰ brackish water and survive short periods of time at a higher salinity. The parasite survives well in Finnish sea areas.

Control and prevention in Northern Lapland

Gyrodactylus salaris is a notifiable fish disease in Finland. River catchments of rivers Tenojoki and Näätämöjoki are officially free of this parasite. River catchments of rivers Paatsoki, Uutuajoki and Tuulomajoki form a buffer zone. The catchment areas of these five rivers that drain to the Arctic Ocean form a protection zone where a Gyrodactylus salaris finding would lead to control measures.

The use of live or dead bait fish is completely banned in angling, ice-fishing and lure-fishing in Upper Lapland. Bait fish may not be brought from other river systems to the Upper Lapland watercourses, nor may they be moved between these areas.

All boats and canoes as well as fishing gear, diving gear and any other equipment intended to be used in water sports etc. brought from other river systems to the Upper Lapland region must be completely dry or disinfected before they are used. G. salaris can survive without a host fish for several days and can thus spread in water or through wet fishing gear and equipment. Gutting fish caught from other river systems or discharging fish waste in natural waters is prohibited in the Upper Lapland region.

The parasite is destroyed in 24 hours in +20 °C. A longer time is needed in moist and cold conditions. Alternatively, one hour in + 60 °C sauna or 10 seconds in + 50 °C water is enough to kill these parasites. Also one option is to put equipment in a -18 °C freezer for 24 hours.

The Center for Economic Development, Transport and the Environment in Lapland has a disinfection station for boats and fishing gear in the Inari fishing port (open during summer). Furthermore, disinfection services for fishing gear can be found in Neste petrol stations in Inari and Seo in Ivalo and Rajamotelli Näätämö motel in Näätämö. 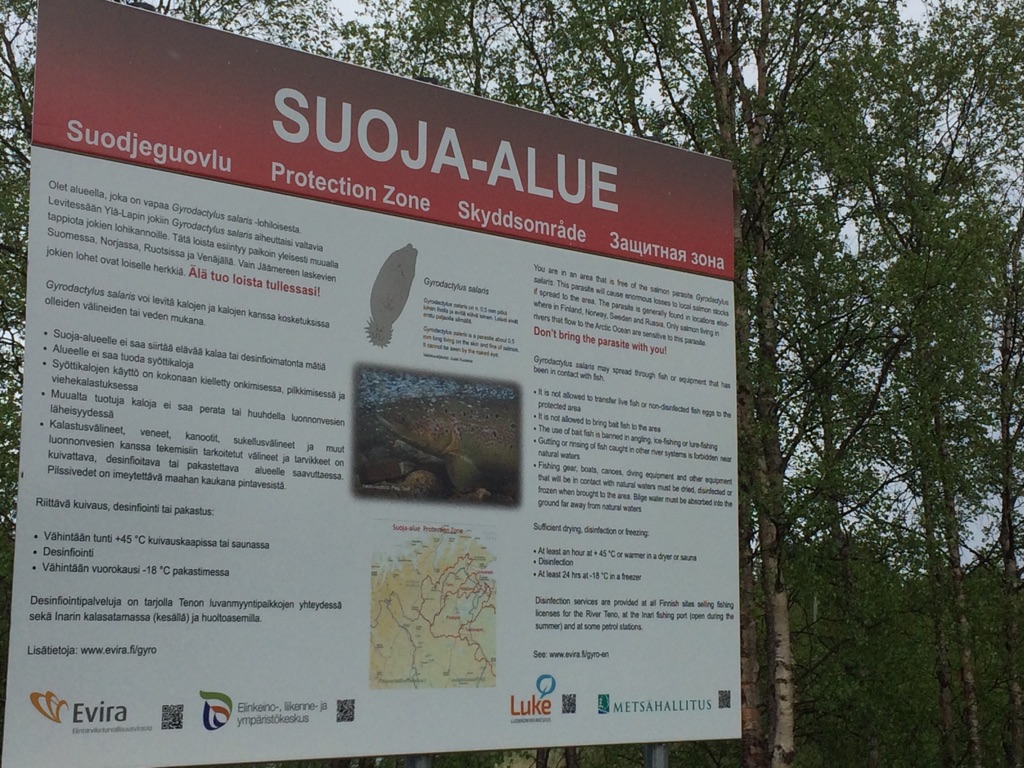 Fin samples from wild fish from the free zone and buffer zone and from a fish farm in river Paatsjoki area are examined yearly.

Occurrence in Finland and elsewhere

The parasite is quite commonly found in Finnish rainbow trout farms in the Baltic Sea catchment area. It is also common in the best wild salmon spawning river of the Baltic Sea, River Tornionjoki. Rivers draining to the Arctic Ocean are free of this parasite. G salaris is also found in the neighboring countries of Finland. In Norway, G salaris has been found in 50 salmon rivers, the northernmost infected river being river Skibotten. In Russia, Gyrodactylus salaris has been found both in the Baltic Sea catchment area and in rivers Kieretti and Vienan Kemi that drain to the White Sea. In Norway, authorities have performed Rotenon poisonings of whole water catchments to destroy the parasite.