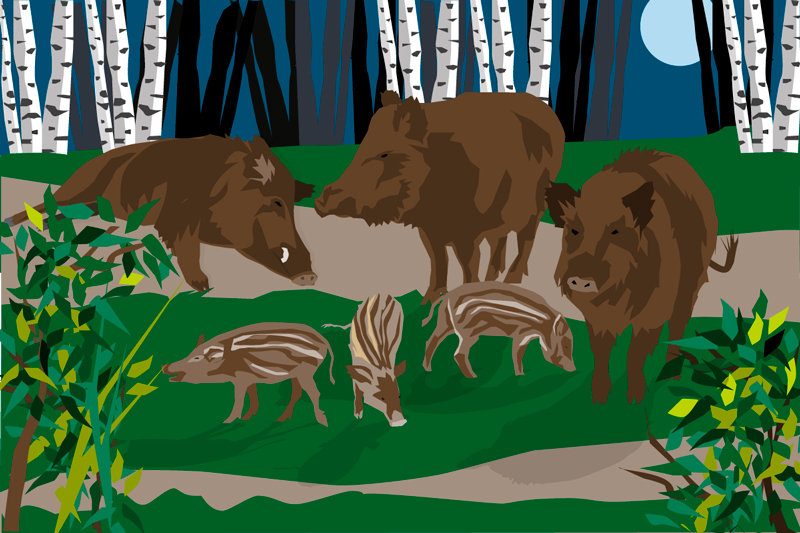 The spread of African Swine Fever (ASF) to Germany, Europe’s largest producer of pig meat and the second largest exporter, is causing unrest in the meat markets and at primary producers in Finland and elsewhere. The rapid rate of the spread of this haemorrhagic viral swine infection in Europe is a reminder that Finland cannot afford to be complacent in its efforts to fight the disease and prevent its spread to Finland.

When, on 10 September 2020, the German authorities confirmed the ASF virus in a wild boar carcass discovered in the state of Brandenburg, Germany’s exports of pig meat to outside the EU came to an almost immediate halt. This was despite the fact that the infected animal was not a pig from a production facility. A sneeze that occurred in Eastern Germany causes flu symptoms in the global market economy in Finland, too: an alternative source is being sought elsewhere for German pig meat, which is now subject to an export ban, and correspondingly a new gap in the EU internal market.

Besides Germany, this disease, which is fatal to production pigs and wild boar, occurs in more than ten other EU countries and behind the EU’s eastern border in, for example, Russia, Belarus and Ukraine. The disease has spread alarmingly outside of Africa also in Asia, especially in China. The list of countries is long and continues to grow.

Occurrences of geographically distant cases indicate how insidiously the virus spreads. It doesn’t necessarily take a wild boar trotting across a border to spread the disease since people themselves can do it: the virus can be hidden in wild boar and pig meat products, the wrapping paper of food brought to eat on a journey, agricultural machinery and animal feed imported from abroad, as well as in quarry from wild boar hunts and in hunting equipment abroad, all of which can travel very far from their starting point. All it takes is a series of unfortunate coincidences before the virus is in the pig’s mouth and the damage has been done.

The threat of the disease spreading to Finland has existed for some time now and concerns about the effects of ASF are increasingly understood. This is why the cases of the disease reported in Germany bring emotions to the surface: why don’t the authorities do anything? Close the borders and ban imports of foreign pig meat! The principle of the free movement of goods in the internal market also allows food to be traded and transported between EU Member States without customs control. It’s hard to disengage from this free movement. Fortunately, the regulation of internal market trading in the EU has taken into account the risks of animal diseases and in areas where African swine fever has been detected, restrictions or additional requirements are imposed on products to ensure their safety. Imports from outside the EU are strictly controlled.

There is no one solution to the problem of the spread of the disease. This was demonstrated by a study, commissioned by the Ministry of Agriculture and Forestry from the Natural Resources Institute Finland, on a wild boar fence on the eastern Border. The project was abandoned last year when it transpired that building the fence would apparently not deliver the desired result in relation to the costs involved.

African swine fever is fatal to pigs. In China for example, the fight against the ASF epidemic has led to the killing of millions of animals. On the other hand, although the disease is not transmitted to humans, its knock-on effects are dire: were the disease to spread to Finland, it would threaten many livelihoods and cause major economic losses to pig farms and the entire meat industry due to the halt in international trade, the destruction of animals and disinfection of farms.

Threat of disease is a common concern

The Finnish Food Authority, which is in the administrative sector of the Ministry of Agriculture and Forestry, has statutory responsibility for fighting animal diseases. The Food Authority has already been engaged in long-term cooperation with other authorities, business and a number of stakeholders to combat African swine fever for some time now. There are common concerns about this animal disease threatening pig farming. Using additional sources available from the supplementary budget for measures to combat ASF, the Food Authority has increased its focus on training, guidance, preparedness exercises and visual influence communication.

To fight the disease, the Food Authority has among other things targeted communication at travellers in ports, aboard trains, at airports, on flights, at border-crossing points, aboard ships and at trade fairs. The Food Authority has also provided instructions on the disposal of food brought to consume on the journey at border-crossing points and at lay-bys. Travellers entering Finland from abroad have an important role in keeping Finland free from African swine fever because viruses can be spread by foods, goods and people.

Information and guidance have also been distributed to professional transport drivers, tourism entrepreneurs and to hikers and other persons out and about in nature. Video public service announcements designed for several different target groups in collaboration with Suomen Sikayrittäjät ry have been distributed through a media campaign and banner advertising, for example.

The fight against ASF requires constant precautions not only by travellers but also by pig farms. Good disease control is the surest way to prevent the disease from spreading to pig farms. Instructions have been distributed and training events arranged in the field by the joint efforts of Animal Health ETT and Suomen Sikayrittäjät ry. Within the framework of Animal Health ETT’s Sikava health classification register, pig farms are offered a chance to assess the level of their disease control using the BioCheck UGent® application, the roll-out of which was partly funded by the Finnish Food Authority.

The help of hunters is also required to map the ASF situation. Thanks to the activity of hunters and other persons out and about in nature, the number of wild boar samples sent to the Food Authority has grown from year to year. To ensure the availability of samples, the Food Authority pays for wild boar samples sent for ASF testing. Videos have also been produced for these key actors in the fight against the disease. These videos have been distributed through an extensive media campaign as well as at trade fairs and on social media, for example.

The operational capacity of the authorities is tested and improved through joint preparedness exercises, with also business representatives being invited to the most recent communications exercise. Also regional exercises will be held during this autumn.

The Finnish Food Authority reports its detailed activities to fight the disease to the Ministry of Agriculture and Forestry on a quarterly basis.

It’s well known that it’s hard to influence people’s behaviour and attitudes. It took a new coronavirus pandemic post Spanish flu to get people to realise the impact their own behaviour has on other people’s health and the course of the epidemic. Even then, not everyone believes in the recommendations or takes any notice of restrictions.

During these coronavirus days, media only manages to focus on one dangerous epidemic at a time. However, removed from the glare of daily publicity, long-term work is also being done to combat other diseases as well. This is the case with African swine fever. All that is needed is for a new case to be reported from a sufficiently near or central area for public interest to be re-awakened in a disease which may be suffering from tournament fatigue. A wild boar carcass in Germany brought African swine fever to the fore again.

You can read more about the Finnish Food Authority’s actions to fight African swine fever on the ASF theme pages.

Email addresses are in the form: firstname.lastname@ruokavirasto.fi