What is a virus?

Viruses are parasites found in cells in humans, animals or plants, smaller even than bacteria that can be detected with a microscope. Viruses lack the cell structure of living cells and their own metabolism, which is why they cannot reproduce outside a host cell. Most viruses, such as the norovirus, produce a massive amount of new viruses after entering the cell. After a while, these new viruses are released and infect new cells.

What is a norovirus?

Noroviruses are the most common cause of gastroenteritis in Finland. They survive well outside their host, are easily contagious and quickly mutate into new strains. Norovirus infections are most common in winter and early spring (Figure 1). An emergent norovirus strain can spread like a pandemic to different continents even over a few months. 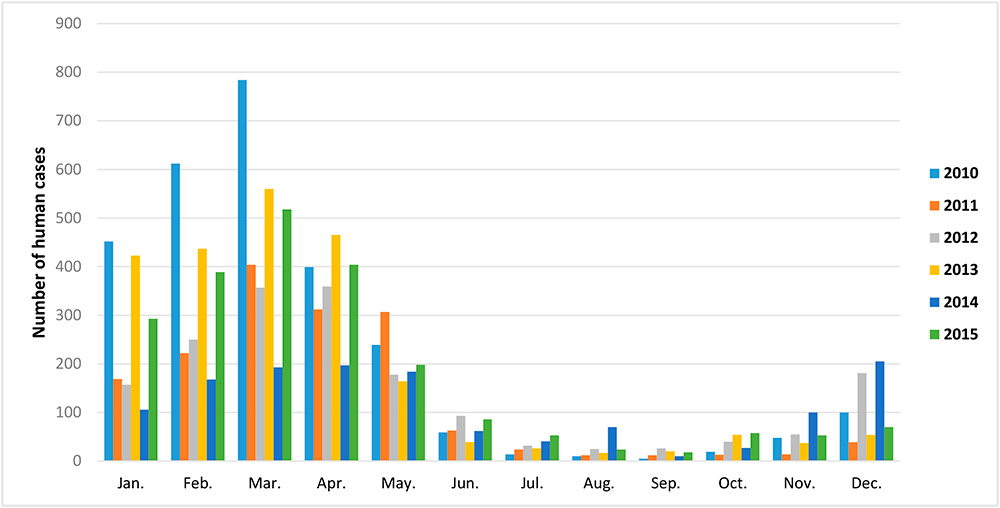 Figure 1. The number of norovirus infections reported in Finland between 2010–2015 (National Institute of Health, the National Infectious Diseases Register). 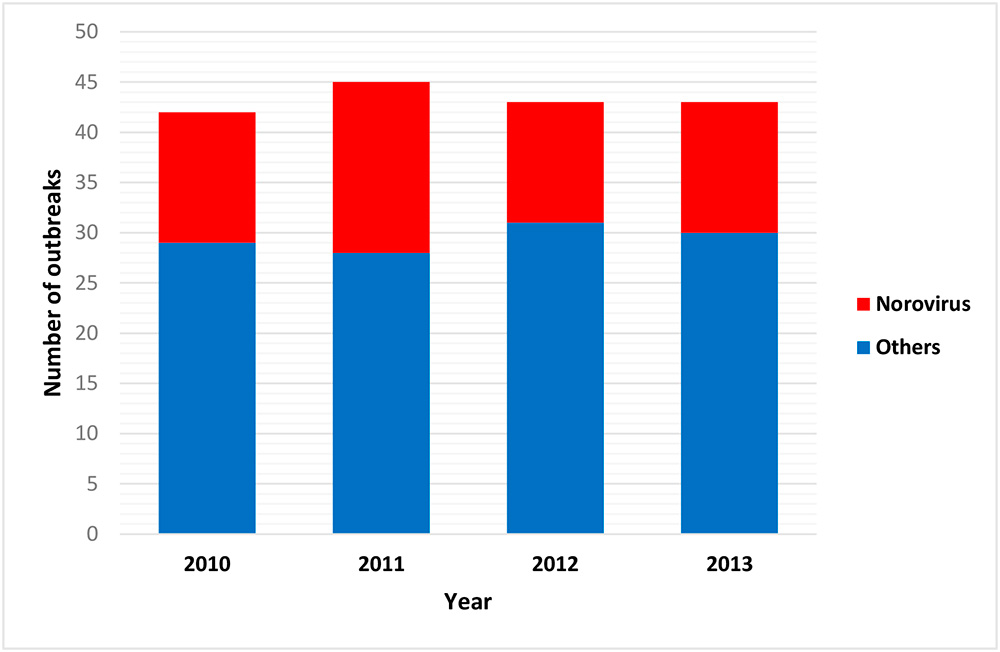 Figure 2. Food poisoning epidemics in Finland caused by noroviruses (in red) and other microbes (in blue) in 2010–2013 (the National Food Poisoning Register).

What kinds of symptoms are caused by norovirus?

Typical symptoms caused by a norovirus infection are rapid onset of diarrhoea and vomiting. Other possible symptoms include nausea, stomach ache, headache, tiredness, chills and muscle aches. Symptoms usually last for 1–3 days, but can be prolonged especially in the case of children and people with weak immune systems. Norovirus infection can also be mild or symptomless.

How is norovirus transmitted?

A norovirus infection may be contracted from food or water that is contaminated with the virus. Norovirus is easily spread from one person to another directly and through many other routes. Primary routes of transmission are considered to be surfaces exposed to vomit or faeces that contain norovirus, from where it is transferred to the mouth, and droplet transmission as aerosol (the faecal-oral route of transmission).

Which foods can be contaminated with norovirus?

Several cases of food poisoning caused by the norovirus have originated from contaminated raspberries, young green onions and leafy greens (for example salads, herbs and sprouts), as well as other fresh produce. Shellfish, such as mussels and scallops, and oysters have also been often identified as a source of norovirus infection. Water used for watering, washing or for example farming clams that has been contaminated with waste water may contaminate food.

On the other hand, any food item that is not heated prior to consumption after it has been handled may contain viruses spread by the person handling the food. For this reason, products easily contaminated with norovirus include sandwiches and the type of confectionary that requires plenty of handling in preparation and where the product is not cooked.

How to prevent the spread of norovirus?

The transmission of norovirus from person to person and from humans to food can be prevented by good production hygiene and appropriate protective clothing. People with stomach symptoms should refrain from handling foods, while sick leave periods should be of sufficient length. Washing hands carefully with soap and water is the primary means of preventing the virus spreading from an infected person. Disinfecting of the hands after washing may be beneficial.

Food production premises must comply with cleanliness standards, including staff rest rooms. Objects touched by hand, such as taps, door handles, handles on kitchen appliances and cupboard handles, should be cleaned as often as several times a day during a gastric epidemic. Vomit or faeces stains left by a person infected with the norovirus must be cleaned off immediately with a strong chlorinated cleaning detergent. People responsible for cleaning should wear protective gloves and a respirator to protect themselves from stain droplets spreading to the air.

In all cases, heat destroys or at least reduces the amount of viruses in foodstuffs. To reduce the risk of viral infections, Evira recommends that frozen berries of foreign origin should be heated thoroughly at minimum 90 degrees Celsius for five minutes, or boiled for two minutes.

Particular attention and care must be paid to primary production of foods that are consumed without heating, as well as to the quality of water used in such primary production. This is because without heating it is practically impossible to eliminate noroviruses. Attention must be paid to the environments where vegetables and seafood are cultivated, while their hygienic state must be monitored.

Since there are no routine methods for detecting noroviruses, and measures that can be taken to eliminate and reduce the virus in the food chain are limited, traceability of foodstuffs and familiarity with the production chain in the food industry is increasingly important in ensuring the quality of ingredients.

How to treat a norovirus infection?

Illness caused by a norovirus usually heals on its own and hospital care is not needed. Sudden cases of strong diarrhoea and vomiting, especially in children and elderly people, may require intravenous fluid treatment in hospital.

Hand rubs have not been shown to be very effective against norovirus, which is one reason why disinfectants must not be used as a substitute for handwashing with soap. Hands should primarily be washed carefully using warm water and soap. Proper handwashing can be supplemented with an antiseptic hand rub containing alcohol. In the case of mass catering services, the use of protective gloves is also recommended when handling ready-to-eat foods. Change protective gloves for new ones whenever you suspect they have become dirty, or when you begin handling cooked foods.

How to clean surfaces in order to destroy the norovirus?

Destroying noroviruses on surfaces depends on several factors, such as the surface material, type and amount of dirt, the amount of noroviruses and the temperature. For this reason, there is no uniform method that would suit all surfaces. However, following the instructions provided by the manufacturer of the detergent and disinfectant will always yield the best results.

Always begin by removing visible dirt on surfaces. After this, disinfect the surface with a disinfectant best suited for the surface material in question (for example one containing hypochlorite, peracetic acid or peroxymonosulfate). Norovirus can also be destroyed with UV light, as long as the light is strong enough.

Vomit and diarrhoea stains are removed from surfaces using an ordinary detergent and a disposable cleaning towel that is disposed of after use. Disinfect the surfaces after cleaning; a disinfectant with a concentration of 1,000–5,000 ppm of active chloride is generally recommended. The disinfectant's contact time must be sufficient.

Is there a vaccination against norovirus?

There is currently (in 2013) no vaccine against the norovirus. However, efforts to develop such a vaccine are ongoing in several countries. The manufacture of efficient vaccines is made difficult by the variety and rapid mutation ability of noroviruses. Because of this, people infected with the norovirus have immunity only for a short time.

Can I become infected with the norovirus again if I have had it before?

Yes. Typically people contract a norovirus disease involving vomiting and diarrhoea several times during their lives. People infected develop a short-term immunity lasting approximately six months against each strain of the virus they have been infected with. These antibodies often offer no protection against other norovirus strains.

Where to find more information on the norovirus?