The state’s seed inspection operations celebrated their centennial anniversary in Turku on the 10th of September with the International Seed Seminar. A number of forward-looking presentations were heard in the event.

The seminar was opened by Leena Pietilä, Head of the Seed Certification Unit of the Finnish Food Authority, who recapitulated the last 100 years’ key events. The methods used for analysing seed quality have not changed all that much over a hundred years. Seed purity and germination capacity analyses continue to be important seed quality indicators.

Greeting from the Ministry of Agriculture and Forestry were conveyed by Deputy Director-General Taina Aaltonen. In her address, she presented the strategy and priorities in agriculture and forestry that, among other things, include preparation for climate change.

Head of Sector Päivi Mannerkorpi of the European Commission pondered upon how the seed sector and legislation will be able to address global challenges such as climate change, population growth, loss of biodiversity and urbanisation. Will the seed sector be capable of utilising the available innovations and new tools, such as digitalisation, mass data and artificial intelligence? Northern areas will be of pronounced significance as seed producers in the future as a result of climate change. New and better varieties are of utmost importance in terms of food security. Genetic diversity must be maintained in order for the breeding efforts to yield results. Copyrights and plant variety rights must be looked after.

According to Mannerkorpi, official seed certification conducted by the authorities must be maintained in the future as well, even though companies in the seed sector use a wide range of quality management tools. The EU seed legislation is largely based on international standards. Cooperation with international organisations is needed. The prevention of counterfeit seed lot labels is currently under discussion. Mannerkorpi assured that legislation may not pose an impediment to the technological development of plant breeding and seed analysis and certification.

Dr. Andreas Wais, Secretary General of ISTA (International Seed Testing Association), presented the organisation. ISTA currently has 81 member countries and 232 laboratory members, the majority of which are in Europe. The pilars of ISTA’s functions are international standardisation of methods, laboratory performance and international seed lot certificates/sample certificates and the dissemination of knowledge between experts. Wais told how operations in the seed sector and those of ISTA as well have developed over the past few years. Technical development has taken place, examples of which are the various seed imaging methods. Training is given online, and the manuals and rules are in electronic format. Continuous development also occurs in the field of analysis. Among other things, alternative analysis for germination are currently under investigation.

Secretary-General Garlich von Essen of Euroseed (European Seed Association) provided an overview of the EU seed market. The value of the seed market is EUR 10 billion, and there are 7,200 companies in the seed sector. Annually, 3,500 new varieties become available to farmers, and a total of 42,000 different varieties of agricultural and vegetable species are currently available. The largest number of new varieties come from Italy, France and Germany. Even a single seed lot may move between several continents. von Essen gave an example of hybrid seeds of vegetable plants. The breeding of parental lines and production of parental seed are carried out in Europe, the production of hybrid seed in Asia, while the packaging and the final market are found in the Americas.

von Essen also commented that the plant breeding methods should not be restricted. Advanced genome editing methods are needed for purposes such as accelerating the breeding process and for producing increasingly complex traits in the varieties. von Essen made a clear distinction between genetic manipulation and new breeding methods. He is of the opinion that the breeding method should not affect the approval of the outcome. Genetic manipulation, on the other hand, involves introducing the genome of another species into the species, the freeing of which he did not support. In the new breeding methods, no cross-breeding between species is carried out, and he thinks that freeing this would be a good thing.

Researcher Kaisa Karttunen of e2 Research presented the current state and challenges of the global food system. The food system is a large and complex whole. A change in a single part will affect all the rest. One important part of the food system is food security. Undernourishment is again on the rise globally. The largest number of undernourished people are in Asia. Problems in food security are caused by climate extremes and various kinds of conflicts around the world. If climate change cannot be stopped now, crop yields are estimated to decrease by 25% globally by 2050. The narrowing of agrobiodiversity also poses a threat to food security. The number of cultivated species has reduced significantly, and only 9 plant species account for 66% of total crop production.

Karttunen also reviewed the challenges of the Finnish food system. These include low agricultural profitability, nutrient releases to watercourses, and food loss and waste, about one third of which is caused by households. The unfairness of the food system also poses challenges. Some people are overweight, while some are partly dependent on food aid. On the other hand, the effects of climate change on crop yield are mild in international comparison. Short-term food security problems can be addressed by imports in Finland, but provisions must be made for long-term problems, because in many production inputs, we are dependent on imported inputs.

Director of Plant Breeding Merja Veteläinen of Boreal Kasvinjalostus Oy presented the plant breeding process and its achievement and pondered upon the future challenges. Breeding has improved the crop yield and agronomic traits and the quality of end products. Veteläinen, too, emphasised the significance of genetic variation in breeding. Variation can be obtained from hardy breeds and existing species, for example, and it can be produced by means of new breeding technologies. Trait measurements, in which sensors and imaging, among other things, can be used, have also been increasingly used in breeding. 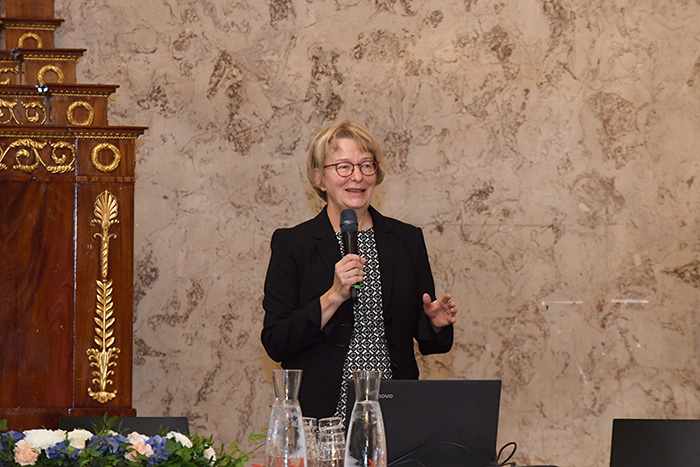 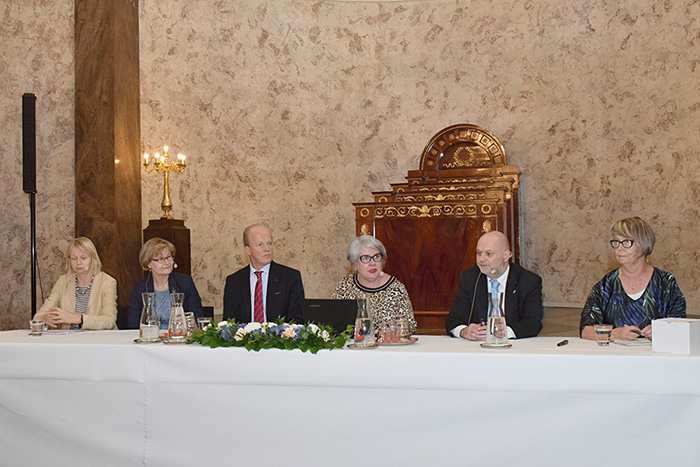 The day was concluded by a panel discussion, chaired by Kirsi Heinonen, on the role of the western countries and the EU in the global food security. From the left: Päivi Mannerkorpi, Merja Veteläinen, Garlich von Essen, Kirsi Heinonen, Andreas Wais and Kaisa Karttunen.

Seminar presentations
Andreas Wais: Role of seed testing in the future world (pdf)
Garlich von Essen: Europes seed sector in a changing sosio economic environment (pdf)
Kaisa Karttunen: Food security Challenges of agriculture in Finland and how they are connected to Europe and the rest of the world (pdf)
Merja Veteläinen: Breeding for the future (pdf)